Lightning was Jim's pick puppy from our first Roberta - Sunny breeding. Early in his career, Jim and Lightning took a major reserve at the Atlanta Specialty and then took a few singles. As our children became more involved in sports, we were able to attend fewer dogs shows. We finally sent Lightning to Johanna, in Rhode Island. With the help of handlers Debbie Studwell and Jessica Plourde, Jo finished him with a specialty win. He returned home to Birmingham after the 2008 SHCA National Specialty.
He enjoyed running in harness with his brother Dom and sister Spice but had the irritating habit of flipping out of his harness any time the team stopped running.
We miss our " dumb blond". 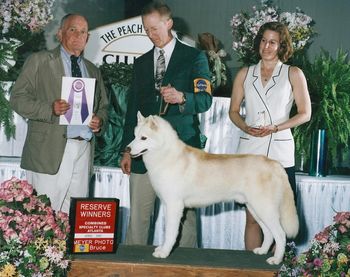 Lightning takes a major reserve at the SHCGA specialty under breeder judge, Merc Cresap. He is handled by Jim. April 2002 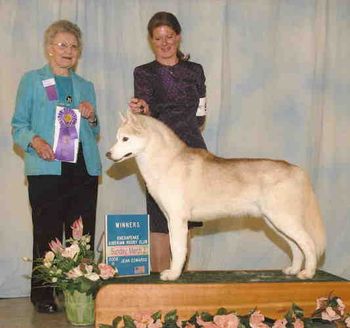 Lightning finishes his championship at the Chesapeake Siberian Husky Club Specialty under breeder judge, Phyllis Brayton. He is handle by his co-owner, Johanna Coutu. March 2008